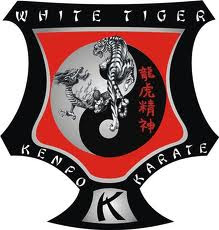 I come to you with only Karate,
My empty hands,
I have no weapons.

But should I be forced to defend myself,
my principles or my honour,
should it be a matter of life or death,
right or wrong,

then here are my weapons,
Karate,
my empty hands.

Our karate is Shiro Tora, Shihan’s own style. As a 7th dan Kyoshi, Shihan is
entitled to found his own style and call it what he chooses.

The style is Shiro Tora, the White Tiger style.

The main background is the Funakoshi style developed in Japan from 1930 to 1950, originally called Shoto Kan (shoto’s house).

The modern Shotokan practiced in the UK is developed from Master
Nakayama’s 1957 JKA style. What is now called Shoto-Kai (Shoto’s council),
founded by Master Egami, is closer to Funakoshi’s original
Shoto-Kan.

Hence our style draws from modern Shotokan, which has more
kumite drills, and ShotoKai, whch has more kata applications.

We also
trace our style back to the Shorin and Shorei styles of Okinawa.

We also
draw from Master Oyama’s powerful Kyukushinkai, especially some of our harder
drills and knockdown kumite.

We also draw from Okinawan Goju, with it’s fluid drills and kata

There are strong connections with our Japanese Jujutsu, Kempo Jujutsu, and Aiki Jujutsu as well as the roots in Chinese kung fu, in particular Tiger Crane.