Our Jujutsu is based on Traditional Koryo Jujutsu, Kempo Goshin Jutsu and Sports Jujutsu.

We train through all 7 dimensions of grappling combat.

Newaza
Groundgrappling, as in Judo, BJJ and wrestling. Pins, chokes, and locks.
We grapple with gi jackets and without.

We also have Ground Fighting as in Vale Tudo and MMA where we keep the gloves on and allow striking in ground range.

Nage – Throws
As in Judo. We practice all kinds of throws and then apply them in randori free sparring.
As well as gi grappling, we use the wrestling concept of tieing up without grabbing the clothes.

Takedowns
Not the same as throws.
Double and single leg takedowns down from the outrange fall into this category.
After a takedown you have the option of following into grappling, locking the leg from standing, striking, or breaking away.

Catch kick takedowns
Fighting at Kickboxing range we catch or “shelf” the kick and perform our takedown.

Karate Sweeps
Fighting at Kickboxing range we sweep the leg to takedown the opponent, as part of an attack combination, or in defence

Projections
As in aikido, when we are grabbed on the wrist, sleeve or collar we use arm and wristlocks to project the opponent to the mat.

Handachi
This is when you are down and the opponent is standing.
In aikido there is a whole section called handachi for this. However, in the West, we don’t kneel on the floor as they do in Japan. If you find yourself kneeling in front of a standing opponent you are at the takedown phase, so do a morote gari.
Our handachi would apply if you were sitting in a chair when attacked for example.
But the worst example of this is if you go down and are lying there while your opponent still stands and tries to kick you. The grappling response is to affect a leg takedown, which allows you to follow to grappling, or to get up and reverse the position – you standing, him lying. 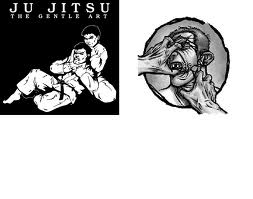