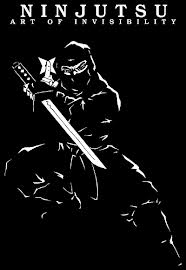 There are 9 schools, or Ryuha that have been passed on to modern times

the other 6 were MAs practiced by Ninja clan that became complete
schools – some are based on Kempo, some are Japanese JuJutsu or Kenjutsu

What makes them “Ninja” is that they were used by the Ninja against the samurai,
tactics preceding techniques as always

This is seen in how a Shuto is done different in Kempo to Kyukushin Karate to Shotokan and why Taijutsu’s Kiten Ken is a unique technique not a variation on Karate or Kempo’s Shuto.

The core of our practice comes from the Gyokko ryu of Koshijutsu, a unique
unarmed combat system similar to Kempo Jujutsu, as well as the harder “bone breaking” method of Koto Ryu.

We back this up with the weapons system of the Kukkushinden ryu school of Happo Bikenjutsu. These include Hanbo, Jo, Bo, Ninjato and Katana, as well as concepts for Spear and Halberd weapons. This school also has a complete Dakentaijutsu Unarmed Combat method.

We pair this school with the chokes and strangles of Takagi Yoshin Ryu Jutaijutsu.

We have the Shinden Fudo Ryu, itself made of two schools, one for Dakentaijutsu striking and one for Jutaijutsu grappling methods.

From Togakure Ryu NINPO School we look at the “Four Treasures” including the use of Shuriken, Metsubushi, and Shuko, along with methods for Taijutsu and Mutodori sword defence.